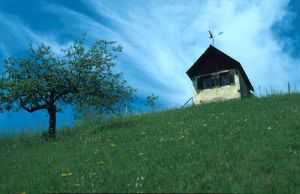 Associated persons Gerhard Dullnig, Daniel Zollner, Stefan Lieb, Michael Jungmeier
Clients Pöllauer Tal Nature Park
Year 2001
The central topic of the project was the representation of the changes of the landscape from 1822, through to the present (2000–2002) and to the future (2022). Starting at the historical state of the landscape as shown in the Franciscan Cadastre, after analysing the land use data from the municipalities and interviews with local experts, we tried to predict the future development of the landscape in the Pöllauer Tal valley. The future scenarios arising from this process were presented in the municipalities and discussed with the citizens. Then all participants together worked out measures that were to influence the development positively and sustainably. The measures ranged from the raising of awareness and the increased marketing of agricultural products to the professional “landscape observation”.
Back
This website uses cookies - more information about cookies and your rights as a user can be found here. Click "I accept" to accept all cookies and directly use our website. Settings