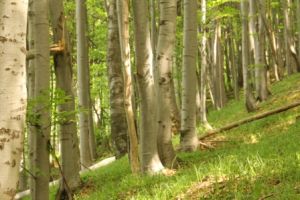 E.C.O. together with the Environmental Agency Austria coordinates the extension process of the existing World Heritage Site „Primeval Beech Forests of the Carpathians and the Ancient Beech Forests of Germany“, financed by the Austrian Federal Ministry of Agriculture, Forestry, Environment and Water Management. The last step in the process of submitting the extension areas to the UNESCO is to provide a Nomination Dossier according to the Guidelines of the UNESCO. To finalise the Nomination Dossier, the communication with the experts of eleven European State Parties as well as between them had to be coordinated and organised. In total 67 areas in eleven European State Parties submitted a joint Nomination Dossier to the UNESCO at the end of January 2016. Albania, Austria, Belgium, Bulgaria, Croatia, Italy, Poland, Romania, Slovenia, Spain and the Ukraine are part of the submitted extension, named „Primeval Beech Forests of the Carpathians and Other Regions of Europe“. A decision is expected in summer 2017.