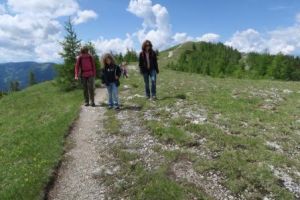 The predicate Biosphere reserve is awarded by the United Nations Educational, Scientific and Cultural Organization (UNESCO) to chosen regions which are exemplary representations for the common development of the sectors biodiversity- and ecosystem protection as well as a traditional type of usage (agriculture, hunting, forestry and eco-tourism). The UNESCO assigned the biosphere reserve Salzburg Lungau and Carinthian Nockberge in 2012, the latter being legally anchored in 2013. Naturally there has been diverse conflict of interest between hunting, forestry, agriculture, nature conservation and recreational use and hence resulting conflicts of interest. During preliminary project work it has already been tried to incorporate all relevant participants and stakeholders involved within the development of the intended project. The goal of the initiative was to elaborate the base of wildlife ecology for the entire biosphere reserve. Thereby the focus was set on the prevention and minimization of any disturbances of wildlife and belonging environments as well as creating awareness for the voluntary and self-responsible handling of visitors regarding sensitive environments and species. Furthermore, special focus was laid on the intensive exchange between all participating parties through the institutionalization of a common platform.