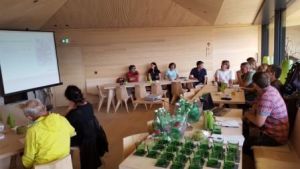 The Tyrolean nature parks are core elements of the federal development strategy. Starting in 2001 with the Zillertaler Alps, the Nature Parks Kaunergrat (2003), Tyrolean Lech (2004), Ötztal (2006) and Karwendel (2010) have been subsequently established. The park administrations are closely cooperating within a Working Group of Tyrolean Nature Parks, and are furthermore members of the Association of Austrian nature parks (VNÖ). Being model regions for sustainable development, their role within the federal development strategy will significantly raise in future. In order to strengthen this role and to define a vision and roadmap for the upcoming ten years, a set of so called “Nature Park Workshops” has been carried out since 2016, supported and moderated by E.C.O.