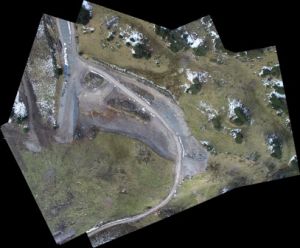 During construction works in the area of the Schafalm on the Turracher Höhe, bogs and wetland habitats were heavily damaged, especially dwarf birches (Betula nana). For this reason, the building owner voluntarily initiated appropriate measures to minimize the acute damage and avoid new ones during the further construction works in 2016 and 2017. For this purpose, Michael Jungmeier and Daniel Zollner (both E.C.O.) were appointed for ecological supervision and the building owner commited to cooperate with local experts. In the course of an inspection, the experts of E.C.O. and the manager of the close Natura 2000 site assessed the vulnerable parts of the area and introduced a series of immediate measures. They also agreed upon a longterm cooperation. The ecological supervisors continued with inspections of the area, vegetation surveys as well as consultation services during the lining of access roads and the axcavation of landfill spaces. Therefore the local population of the very rare dwarf birch as well as threatened habitats as raised bogs and fescue grass could be preserved