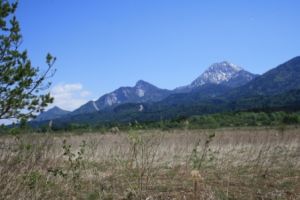 The Finkensteiner Moor to the west of Lake Faaker See/Carinthia is one of the largest and most unspoilt areas of marshland in Carinthia. For the resident population it is a habitat and also a leisure region. For this reason in particular, it is important to raise the population’s awareness of the special characteristics of the marsh by placing it in its natural setting. By means of the existing themed trail which leads across the marshland, the population are being shown important connections, ecological aspects and the unique flora and fauna. During the course of extending the themed trail, which has already been commissioned, an interactive information point in the entrance area has been designed and implemented by E.C.O.