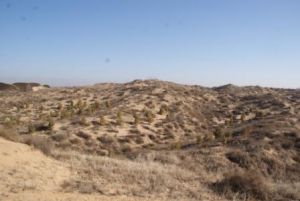 Desert habitat. Establishment of a nature experience and education centre in Shaanxi/China

Yulin City is situated in the northern part of Shaanxi Province and is one of the seriously desertified areas in China. Through a series of measures, the sand dunes were stabilised and surrounded by reforested areas. This has enabled grazing of the area and has produced both ecological and economic benefits. A nature experience and environment education centre in the city of Yulin should promote an understanding of the high ecological, social and economic importance of nature and sand land ecosystems for the city’s population, for mankind, as well as for the flora, fauna, biodiversity, environment (soils, water, air) and sustainable development. The exhibition will be implemented within the “Sand Land Treatment and Biodiversity Conservation Project” which stretches along the Great Wall in Yulin, Shaanxi Province” and will focus on sand land and its biodiversity, habitats and the necessity to protect the fragile ecosystem. The project is financed by KfW, a German government-owned development bank, and implemented by German and Chinese partners. E.C.O. was commissioned by the German partner GFA Consulting Group with the planning of the education centre and works closely with the municipality of Yulin and the Yuyang District Forestry Bureaus.