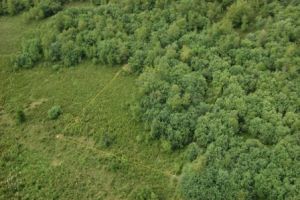 A long-term monitoring of Hörfeldmoor was established in 1996, i.e. 20 years ago, on the basis of a concept by E.C.O. After surveys conducted in 1996, 1997, 1998, 1999, 2004 and 2010, valuable data on the site is available. To continue this monitoring process, another survey is carried out in 2015/2016. The monitoring programme is based on seven permanently installed and marked investigation areas. This is where the spatial distribution of vegetation units, floristic species and an estimate of indicator species are analysed in 12 subplots along a transect. Additionally, in some analysis phases, current aerial photographs were taken to ease the interpretation of changes in the landscape and its usage in the area. After very complex tests using a zeppelin, a small aircraft and a helicopter, we for the first time employed our nature conservation drone E.C.O.pteryx for this analysis. This method allows for high-resolution aerial photographs of excellent quality. In addition, cultivation, touristic uses and nutrient input are documented and used for the time series analysis. The cartographic time series analysis reveals the dynamic development of complex vegetation patterns and mosaics.