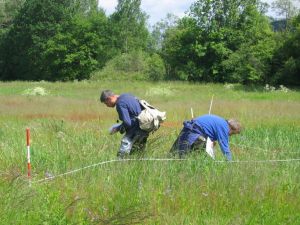 The fallow land project in Metschach “Restoration of intensively used arable land to wet meadows” has studied the vegetation ecology since 1990 and has been managed by E.C.O. without interruption since 1997. This makes it the longest implemented vegetation monitoring in Carinthia. As well as studies of the vegetation, in the early years zoological and hydrological surveys were also undertaken. The surveys take place on a total of 29 permanent test areas and document the succession evolution and ecological potential of areas of set-aside farmland.