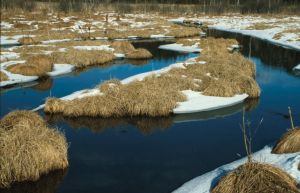 Ramsar bogs and swamps in Austria

For the series of publications by the Federal Environment Agency E.C.O. developed a book about moors of international significance (corresponding to the Ramsar Convention). With this project, the Federal Environment Agency wanted to push the implementation of the Ramsar Convention in Austria. Moorland conservation was to be increasingly brought to the awareness of the people, in particular of the respective region. The Ramsar bogs and swamps in Austria are documented in this book comprehensively and generally understandable. The handled areas are: Hörfeldmoor, Pürgschachen Moor, Sablatnigmoor, Rhine delta, Rotmoos in the Fuschertal valley, Pond and fluvial topography of the Waldviertel. Every area is described in detail. The main focus is on the history of development, culture and utilisation, but also the different habitats, plant communities and animal groups are sufficiently considered. Additionally, potential hazards, impairment and measures that are urgently to be taken for the conservation of these protected areas are dealt with in a summarising chapter.