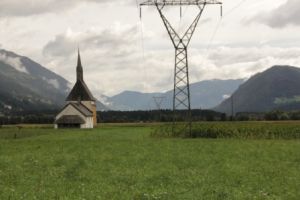 The Austrian Power Grid (APG) owns and operates the trans-regional high voltage grid in Austria. With its project “Nachhaltiges Trassenmanagement” [“Sustainable Power Line Management”] the APG has made it clear that it not only wishes to guarantee security of supply for the population, but in addition wishes to accept responsibility for the protection of nature and the environment. During an initial pilot phase of the project, E.C.O. was commissioned with evaluating the habitats of defined sections of the power lines and suggesting care measures. During site visits to the pilot section in the Upper Drau Valley, the respective habitat types and the occurrence of nutrient indicators, neophytes and shrub species were documented, and habitats of value in terms of nature conservation were recorded. After all the data had been input and presented in a GIS, finally 34 suggested measures were developed.

In the second phase E.C.O. is supporting and advising on the survey of the existing situation and the development of measures.