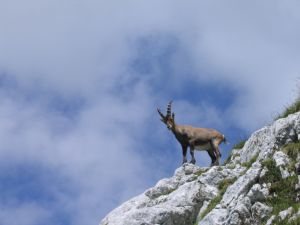 This research project addressed the mathematical and economic modelling of various conservation strategies and the role played in this by individual decision makers. Using the example of two flagship animal species in the Hohe Tauern National Park (the snow grouse and ibex) our Institute carried out ecological spatial modelling. Initially we modelled the potential habitat, and then built on this to show the disruption of the habitat (for example by tourism) and the change in the population that this would cause. The data obtained from the GIS modelling formed the basis for calculations by the Institute of Economics [Institut für Wirtschaftswissenschaften]. The outcome of this project is mathematical models of the mutual interaction between the economy and the ecology.