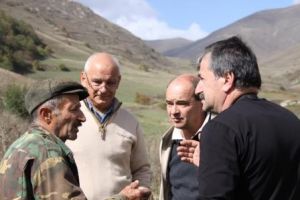 Strengthening of the Armenian system of protected areas – feasibility study

Associated persons Michael Jungmeier, Sigrun Lange, Günther Loiskandl
Clients KfW - German Developement Bank
Regions Armenia
Year 2010
The system of protected areas in Armenia is to be further developed within the framework of the Caucasus Initiative by Germany’s KfW Development Bank. The feasibility study analyses the ecological, economic and social conditions in southern Armenia and prepares an investment programme to the value of € 8.25 million, in the course of which the Shikahogh State Reserve, the Arevik National Park and the Sanguesur National Park will be further developed. In addition to investments in infrastructure, education and equipment, the regional economy and the municipalities will be strengthened through this project. The project is being developed in close cooperation with Armenian experts and institutions as well as representatives from the region.
Back
This website uses cookies - more information about cookies and your rights as a user can be found here. Click "I accept" to accept all cookies and directly use our website. Settings