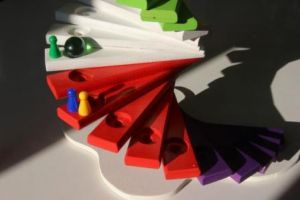 Game on economic associations “Regionale Spirale” – local loop: Together against the downward trend

Associated persons Christina Pichler-Koban, Michael Jungmeier
Clients KWF, Kärntner Wirtschaftsförderungs Fond (Carinthian Economic Promotion Fund)
Year 2018
The economic association “Kärnten Mitte”, based in the central region of Carinthia, has commissioned the development of a prototype for an educational game to support the association’s activities. It should help the players to better understand the complex structure of a region with its different actors and their often very different goals. The first draft is now the "Regionale Spirale". Together, the players try to work against the downward trend and, by making good agreements, act both for the benefit of the region and in their own interests.
Back
This website uses cookies - more information about cookies and your rights as a user can be found here. Click "I accept" to accept all cookies and directly use our website. Settings