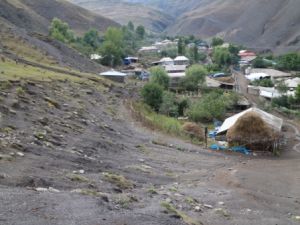 Development and implementation of a field campaign on grasslands in Azerbaijan

Since the dissolution of the Soviet Union and the redistribution of ownership and farming practices, grassland areas of Azerbaijan, especially pastures, are under heavy pressure. The result of unsustainable management practices, overgrazing, infrastructure projects and climate change is a degradation of pastures as well as on-going soil erosion. To tackle those issues, the Ministry of Agriculture of Azerbaijan was commissioned to implement the State Program on Efficient Use of Pasture and Hay Lands in the Republic of Azerbaijan for 2018-2022. The intention is to put a hold on further degradation of grasslands, conserve and sustainably use winter and summer pastures and hay meadows and increase the productivity of those areas.

Solid data on grasslands is a prerequisite to achieve the state program indicators- E.C.O. was entrusted with baseline surveys and analyses of grassland in Azerbaijan in two missions. In a first mission, data from plots on summer pastures (mountainous areas in the Greater Caucasus) and on meadows / hay lands in mountainous areas and lowlands will be collected. In a second mission, the same parameters shall be collected on winter pastures in the lowlands. The data will be used as an evaluation basis for a remote sensing project of the DLR.