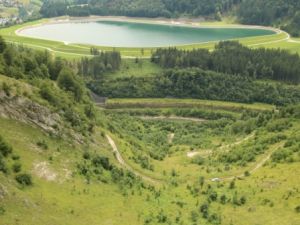 Associated persons Michael Jungmeier, Hanns Kirchmeir, Corinna Hecke
Clients Gesäuse National Park
Regions Austria
Year 2014
Due to its exceptional landform configurations and high relief energy, most natural processes occurring within the borders of the national park are characterised by complex dynamics of disturbance. These dynamics are key factors determining the occurrence of certain life forms, habitats and species. In the course of the project, this system was explored in detail by the example of an avalanche system in the eastern part of Gesäuse (Kalktal). The specific requirements of the project called for the development of an innovative theoretical approach. This encompasses an on-site vegetation mapping in combination with taking aerial pictures with a small UAV. This should allow for describing the avalanche system from an ecological point of view. On a more general level, the disturbance regime can be characterized by the parameters intensity and frequency. Intensity is being described by the habit types and species.
Back
This website uses cookies - more information about cookies and your rights as a user can be found here. Click "I accept" to accept all cookies and directly use our website. Settings