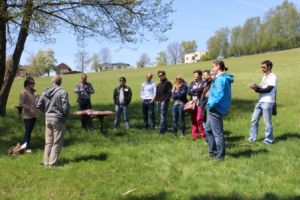 Associated persons Michael Jungmeier, Anna Kovarovics
Clients KWF
Regions Austria
Year 2014
The Carinthian Economic Promotion Fund (KWF) commissioned E.C.O. to implement a workshop series and to organize a “field study tour”. The project focused on finding ways to integrate sustainability into the professional routines and funding structures of KWF. Based on individual interviews E.C.O. collected ideas and expectations as well as the current implementation status of sustainability at KWF. Subsequently, E.C.O. facilitated three workshops to reach a common understanding of the term “sustainability”. In the course of the two-day field study tour to the Nockberge Biosphere Reserve, the elaborated ideas and approaches were consolidated and concrete experiences with sustainabilty enabled.
Back
This website uses cookies - more information about cookies and your rights as a user can be found here. Click "I accept" to accept all cookies and directly use our website. Settings